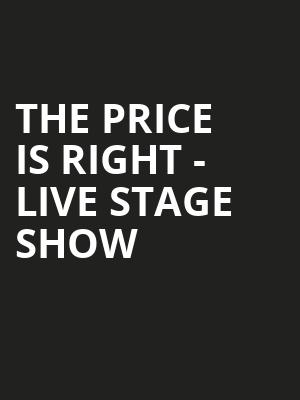 "Come On Down" to be a part of the hit TV game show!

Why See The Price Is Right - Live Stage Show?

The TV Classic Live On Stage

"Come On Down" for this hit interactive stage show that gives you the chance to play the world's longest running gameshow live on stage! Contestants pulled from the audience have the chance to win appliances, vacations and even new cars by playing classic games from the programme, including everything from Cliffhanger to the Big Wheel.

And don't worry if you're not picked because everyone in the audience is still in for a shot at some prizes, with random names being drawn out of the hat throughout the show. Daytime Emmy Award winning presenter Todd Newton is on hosting duties. If there's one thing better than the excitement of watching it on TV it's experiencing it all live! Catch all the fun when it plays in , ,

It's a family show, but only those aged 18 and above are able to compete as a contestant.

You may be required to have had a COVID vaccine in order to attend this performance or show proof of a negative test. Please contact the venue directly for more information on this.

About Roanoke Theater: We are an independent show guide not a venue or show. We sell primary, discount and resale tickets and prices may be above or below face value.

View all times and dates

I'm soo excited to be going to this event, because I sometimes have difficulty... more

So excited! Going with my whole family! more

Read all reviews Write a review

Sound good to you? Share this page on social media and let your friends know about The Price Is Right - Live Stage Show at Berglund Performing Arts Theatre.

Keep up to date

I want email news and updates for events in my area! Read how we protect your data.

You know the drill, websites need cookies to make them work. Details of how we do it here. Hello! It's probably obvious, but we need to let you know that we use cookies to enable us to run this website and for it to actually work! You can find lots more detail in our Cookie Policy.
Got it!